This is an updated review in conjunction with last year’s review of Sonic Mania, and the original review can be found at the end of this review. This review elaborates and builds on the review published at the original time of release.

After a successful comeback which saw the infamous blue hedgehog return to Green Hill Zone last August, Sonic Mania got the physical release treatment with the definitive retail release, Sonic Mania Plus.

Mania mode has been given a new lease of life with cutscenes taking place after the end of every Act 2 level, though all the levels have been given a new coat of paint and have been remixed for Encore Mode, which brings back Mighty the Armadillo & Ray the Flying Squirrel.

Encore Mode brings about 3 Game Slots instead of 8, which is perfectly understandable as less is more, but being able to switch between five characters (two during gameplay) is a plus, for instance, Sonic & Tails, Mighty & Ray or even Sonic & Mighty.

Angel Island Zone returns in Encore Mode, with Mighty & Ray trapped in a pod that can only be broken by either Sonic, Tails or Knuckles. 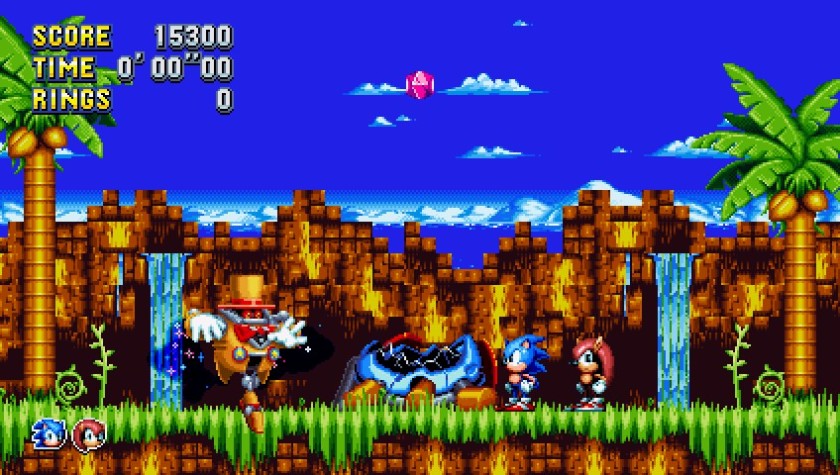 Encore Mode gives you more than you initially bargained for, however, as you can play as all five characters that you can switch to during gameplay, but, if all 5 characters fall into bottomless pits or are crushed by spikes or areas of the level they’re unable to escape from, you can expect to see yourself with a game over and your score during gameplay being wiped. 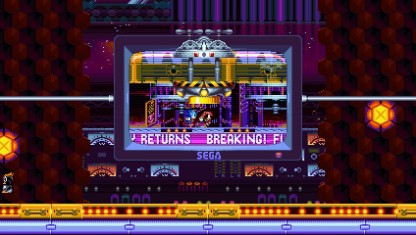 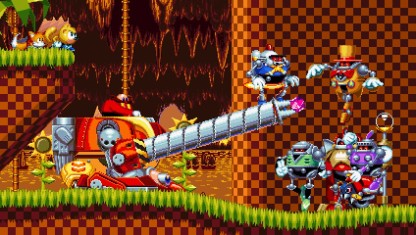 This is because unlike Mania Mode, where you could collect up to a maximum total of 99 lives, Encore Mode gives you 5 lives, all 5 of which are the characters, though you get to retry the same boss 5 times before resulting in a game over from the last level you reached.

I’ve had a chance to try Encore Mode myself considering I got my physical copy of Sonic Mania Plus on the 17th July (Day of Physical Retail Release) and it is not as easy as I first thought, but it’s a whole lot of fun considering the levels have been remixed, with all zones, Green Hill Zone, especially, all being given new coats of paint.

Green Hill Zone, in Encore Mode, feels more like Sunset Hill Zone from Sonic Advance 3 (GameBoy Advance), whilst most of the levels remind me of the nostalgic days of some old-school Nintendo games. Flying Battery Zone in Encore Mode reminds me of the old-school Super Nintendo Entertainment System (SNES) and the original Nintendo Entertainment System (NES) given the colour palettes for both Act 1 & 2 have that retro appeal, though Stardust Speedway Zone Act 2 in Encore Mode feels exactly like Act 3 of Stardust Speedway Zone in Sonic CD.

If you own the PC Version of Sonic Mania Plus, you can purchase the Encore DLC complete with Mighty the Armadillo, Ray the Flying Squirrel & Angel Island Zone on Steam for the same reasonable £3.99 / $4.99.

What is special about the physical release of Sonic Mania Plus?

The physical release of Sonic Mania Plus is the definitive version of Christian Whitehead’s first official independent project which involves the likes of Simon Thomley of Headcannon, who helped “Taxman” successfully port Sonic the Hedgehog, Sonic the Hedgehog 2 & Sonic CD to iOS, Android & PlayStation 3, Tee Lopes, who is very well known for releasing remixes inspired on past Sonic levels, along with other remixes inspired on other games made by other franchises, Tom Fry, who handled the art direction of the 2013 mobile release of Sonic 2 and Sonic Mania and Hunter Bridges of Hyperkinetic Studios.

What comes with the physical edition of Sonic Mania Plus?

Aside from the physical version of Sonic Mania Plus, you also get a 32-page art book consisting of the concept art, logos and designs that developed over the course of the game’s development process to what would become the final product. A reversible Mega Drive / Genesis cover is also included in the physical release of Sonic Mania Plus, which is ideal if you have some of the old Mega Drive / Genesis games with the iconic box art from the 90s.

Exclusive to Japan was the 2CD Soundtrack for Sonic Mania Plus, which comes to 54 tracks, along with limited edition copies of the physical version consisting of the Japanese cartridge-inspired artwork, keeping true in line to the box art of the original Sonic the Hedgehog games in the 90s.

A SEGA Shop Japan Exclusive Deluxe Package for Sonic Mania Plus contained physical goodies, such as a t-shirt, a canvas purse and stickers.

On the back of the 32-page art book, there is a morse code inscription at the top that reads: “Together, we are greater than the sum of our parts.”

What makes Sonic Mania Plus exciting where Mighty the Armadillo & Ray the Flying Squirrel come in?

What makes Sonic Mania Plus exciting is Mighty can perform the Hammer Drop. which allows him to smash through enemies and ground pound through the Encore Mode stages, and because of his hard shell, this allows him to protect himself by deflecting off spikes and anything that enemies throw/fire at him.

Ray the Flying Squirrel can fly through the scenery of each level whilst discovering new areas of the landscape in Encore Mode, and this allows him to access the hard-to-reach areas of the levels that some characters may not necessarily be able to access at first hand.

Ray can also, dangle upside down on the bars whilst looking at you during the game, which brings humour that lightens the mood of the game and makes it more interesting and fun to play. 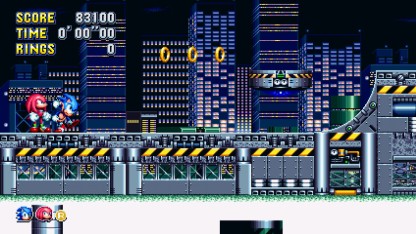 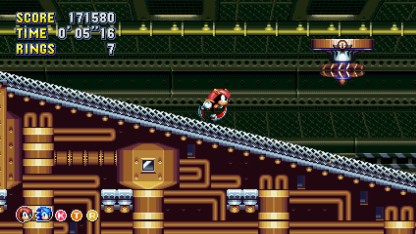 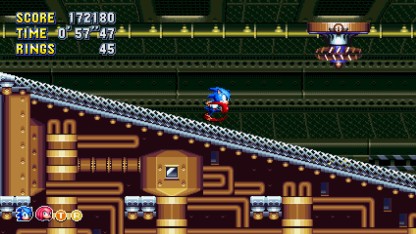 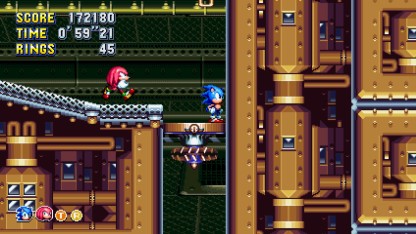 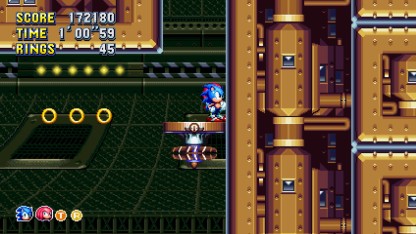 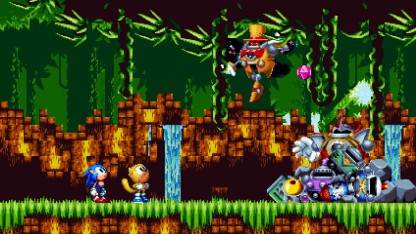 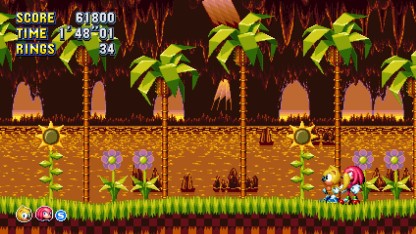 What has been updated to make Sonic Mania Plus a definitive release?

Saving replays are now the ideal way of being able to play back the speed-run and even challenging them, and whilst challenging a replay of the speed-run you have completed, your previous attempt will be shown as a ghost during gameplay.

A pinball bonus stage comes bundled with Encore Mode which allows you to double your overall score with rings, continues and even gives you the chance to grab Mighty, Ray, Sonic, Knuckles or Tails during the pinball bonus stage depending on the two characters you have during gameplay. 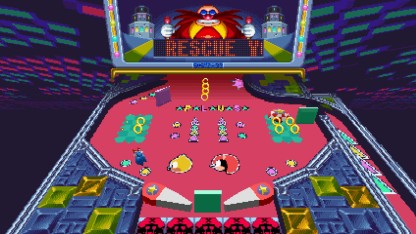 Sonic Mania Plus is a remarkable upgrade considering the game has been polished and improved with additional content and with bugs being fixed that were present in the original release, and while the definitive physical release is the same as the digital release, the Encore DLC gives the physical release and gamers many more reasons to play a game that marked Sonic’s nostalgic return to form.

If you’re ready for an encore, purchase your physical copy of Sonic Mania Plus from all retailers, or if you’re a Steam user, grab the Encore DLC at the reasonable price of £3.99/$4.99.

Sonic Mania Plus is a perfect return to nostalgic form and is a game you cannot go wrong with and it doesn’t disappoint. It’s the game we’ve all waited for. Grab your copy!

P.S. If you wanted to read the original review I did on this game on release day last year, please click here.

© The Sonic Mania Plus logo, including all the screenshots, thumbnails and official key art are all copyright of SEGA, Sonic Team, Christian Whitehead, Tee Lopes, Lola Shiraishi, PagodaWest Games, Headcannon and Hyperkinetic Studios. Full copyright goes to the respective owners.